FacebookInstagram
Get Info
Dogs in Cohousing…What’s the Scooper?

Dogs in Cohousing…What’s the Scooper? 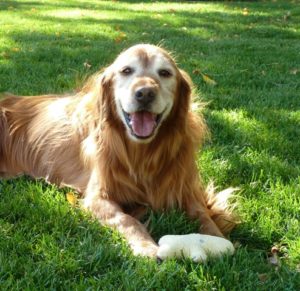 one of our hosts

I’m one of those people more apt to remember your dog’s name than your name. Truth be told, I’m more interested in seeing pictures of your dog than your grandchild. I’ve only not had a dog in my life for a matter of weeks. Until I was 24, it was one at a time, then two, which quickly became five and once there were eight. My theory is that if you go past 5, it’s all pretty much the same within reason. In 900 square feet of space, we “worked like a dog so our dogs could live like a person”.

We thought cohousing was totally unrealistic for us given the size of our yard (2/3 acre) and the private “dog-park” that our dogs shared with vegetables on half of that. Full disclosure, we fostered seniors for Golden Retriever Rescue of the Rockies (GRRR) for 15 years. In that time we only “foster failed” (adopted a dog) eight times, which wasn’t bad considering we lost count after fostering around 150. Fast forward and our “only” dog is now 11 and I have become allergic to both dogs and cats.
My bias and experience allow me to consider all sides in writing policy regarding dogs in cohousing. As a founder of Ralston Creek Cohousing in Arvada Colorado, I look forward to living in cohousing with other people’s dogs. The condominium building with smaller than average units (from 500 to 1100 square feet) will make the common house a well utilized amenity. My dog loving side would have no problem with off leash canines, but my practical side knows that dander and saliva will give me hives. For other people (and for me with cats) the end result is excruciatingly itchy eyes and shortness of breath. Some people just aren’t comfortable with dogs.

I am lobbying for doggy door exits from personal units at both ends of the building entering into small fenced yards for the convenience of humans and canines. The Ralston Creek Trail will be right out our courtyard door and provide a glorious shaded place to walk for miles, but sometimes you won’t want to get dressed or venture out in the middle of the night.

At the same time, I would hope to have a dog free zone to be able to read outdoors without compromising my health. I would want dog owners to respect the CSA garden (Community Supported Agriculture) as a dog free zone. I also would only want non- aggressive dogs. I would expect their owners to control their behavior relating to jumping on others, food snatching, destruction of personal property & landscaping and barking. Not all dogs will be a good fit in cohousing.

The Gatehouse (the cohousing condominium building with 20 units and the common house) will have state of the art air filtration. It will also have state of the art pooper scoopers both indoors and out for human companions to prevent the obvious. In addition to compliance with Arvada’s pet laws, a committee will recommend policies in accordance with those in the Geos neighborhood HOA regulations and specifically relevant to condominium living.

Although pets are common in cohousing, you might be able to get your “pet-fix” without having to own a dog. Among responsibilities we might share with our neighbors is dog sitting, walking or just being the stay at home “dog-mom/dad” able to easily let out someone’s dog mid-day.

If you are looking for a volunteer activity without a long drive, Golden Retriever Rescue of the Rockies has 5 acres near 72nd and Indiana and is always looking for on-sight volunteers. Their dog walking program (VIPS) is human social as well as dog social and they sponsor lots of events for dogs and their people like an annual picnic at the Boulder Reservoir, Spring Fling and a Halloween costume party at “Phoebe’s Place”. The facility is only open by appointment, which makes it tranquil (yup, I’m plugging my favorite non-profit).

If you’re not familiar with Arvada, it’s pet friendly…especially in Old Town…which has an independent pet shop. There’s a large off leash dog-park within a few miles and multiple vets/animal hospitals nearby.